Feeling lazy when it comes to blogging, but I intend to blog regularly from now on.

First up some polishes I bought from American Apparel. 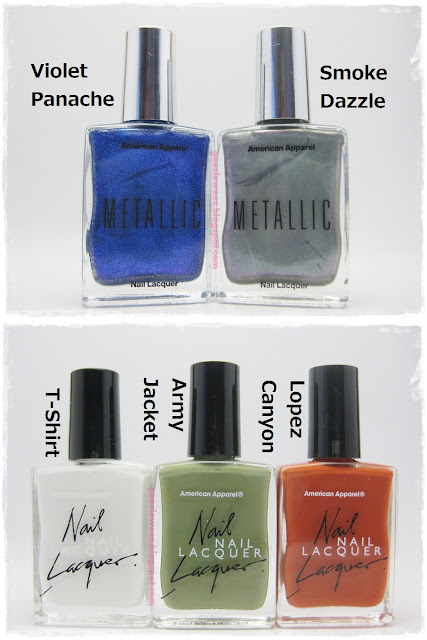 I had a Teambuy coupon that I needed to use up before it expired so I went shopping with my friend a couple of Fridays ago and got two of the new metallic polishes and three creme polishes.  Skipped the glitter polishes even though I thought of buying them, but I already have similar glitters so I passed on them.

The two new metallic polishes are quite different from the others that were first released.  These ones are thinner and need about 3/4 coats for full opacity.  Not great for stamping like the others.  But these ones seem like duo chromes so I guess that makes up for the inability to use 'em for stamping.

My camera captures Violet Panache really really blue, it's actually purple most of the time.  At some angles and lighting it flashes blue.  But my Canon cameras only pick up the blue and I can't be bother to colour correct in a photo editor.  Smoke Dazzle has some pink in it which you can sort of see from the bottle picture.

Next, here's a mani I did with Violet Panache. 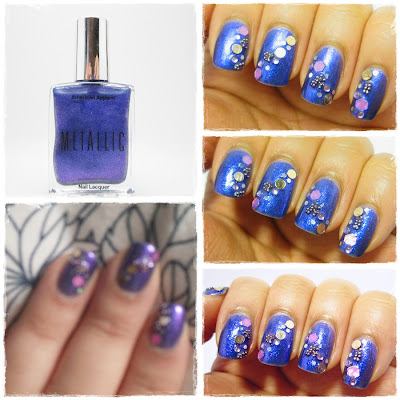 I think I did 4 coats of polish and then used a bunch of rhinestones, hexagons, bullion beads, and the circular mirrors.  Three different cameras used for the right hand side and all show the same blue colouring.  The blurry picture on the bottom left hand corner shows what the polish colour usually looks like.  I took it with a Sony camera that's really meant for videos and doesn't have a macro setting for photos.  Really quite nice and I like this better in real life than in pictures.

Helen
This blog is just a place for me to post about nail polish/nail art and pretty much whatever else I want. Alternate place to find me would be on geezleweez.tumblr.com.